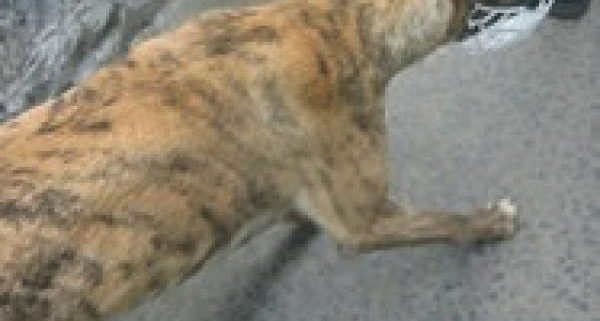 SPANISH ATTEND LIMERICK SALES MAY 2005â€¨â€¨On May 10th 2005 Limerick Animal Welfare workers attended the Limerick Greyhound Sales, this is what they found…
This was a terrible experience for us. The owners of the dogs had no problem selling their dogs to the Spanish. They were aware of the living hell that lay ahead for their dogs in Spain but they did not care. We watched as these beautiful dogs were being loaded on a terrible transporter to begin the long torturous journey to Spain. They were hot, thirsty,hungry, nowhere to sit, unable to stand properly and hidden from view.â€¨
Photo above shows young bitch being loaded onto transporter. She did not want to go and was pulled with great force with a lead and put on the transporter. The conditions were atrocious and to think these unfortunate greyhounds had to endure a journey of at least 1,200km depending on the route. We believe these dogs went from the Limerick track to Dublin then the ferry Dublin to Holyhead, England. From there south to Dover and then the ferry from Dover to Calais, France. Then the long journey through France, over the Pyrenees and down into Spain. Then their life’s as racing greyhounds at the Meridiana Track begins. The ISPCA and RSPCA followed the transporter and driver from Ireland to Barcelona in 2003. The entire trip was observed and complaints documented and filed with the authorities. Their was no response and this man and his transporter are fully licensed to take greyhounds from Ireland to Spain by the Irish Department of Agriculture. This transporter allows two greyhounds to a crate muzzled. The water bowl is tiny and the muzzles do not allow easy access to the tiny water bowl that must be shared by two dogs.
The stress of loading two dogs to a crate is enormous. The greyhounds are terrified.â€¨
Photo’s above show greyhounds terrified being forced onto the transporter. One was literally thrown in on top of the other. The crates measure 70cms high. The greyhounds measure approx 70cms high to their shoulders, and therefore could not stand to their natural height. In the compartments shared by two dogs the measurements meant that only one dog could sit down at a time. It was difficult to take photos as we were threatened at regular intervals and told our cars would be burned and we could be shot. The canvas cover was pulled down over the cages as we approached.
WHAT HAPPENS TO THE GREYHOUNDS IN SPAIN?
The Spanish buyers regularly attend the Limerick Greyhound Sales to purchase greyhounds to race at The Meridiana Track. They need 800 bitches to run their show in Barcelona because they have a minimum of 11 race meetings weekly plus more on feast days. At each meeting, there are 15 races of 6 dogs meaning they need 70 dogs at each meeting. Dogs run about once every 2-3 days.They need so many races because the money they make is so poor , they make up for it by running the dogs into the ground. â€¨
The dogs are kenneled in the Santa Coloma complex in Barcelona. This has been called a dog concentration camp. The Irish greyhounds begin to suffer the day the Spanish buy them, and suffer for the rest of their life’s unless they are lucky enough to be released to a rescue organisation. In 1997 the ISPCA and RSPCA visited the Meridiana Track and the Santa Coloma Kennels. An excerpt from their findings is as follows: Approximately 900 greyhounds were forced to spend 21 hours in terrible kennels with no air conditioning.Greyhounds were infested with parasites and nursing open sores. Greyhounds were administered substances such as amphetamines, caffeine, anabolic steroids and cocaine.â€¨
Greyhounds were forced to sleep on hard concrete with no bedding. Greyhounds showed a high level of hair loss, urine scalding and skin irritation. Many dogs were lame and carrying injuries. Many dogs had open wounds which were not attended to. We have documented evidence from England, which proves that conditions were still the same in August 2003. An excerpt from the report states, many greyhounds are dirty and bald.Signs of musculoskeletal wear and tear are apparent as the dogs walk stiffly, as if their hips and joints cannot bend without pain. We have documented evidence and photographic reports from Belgium that conditions were just as bad in October 2004,
which supports our claim that Irish Greyhounds racing today at Meridiana and forced to live at the Santa Coloma Kennels are being subjected to unbearable